Skip to content
Ironcult » Uncategorized » Call of the Ocean 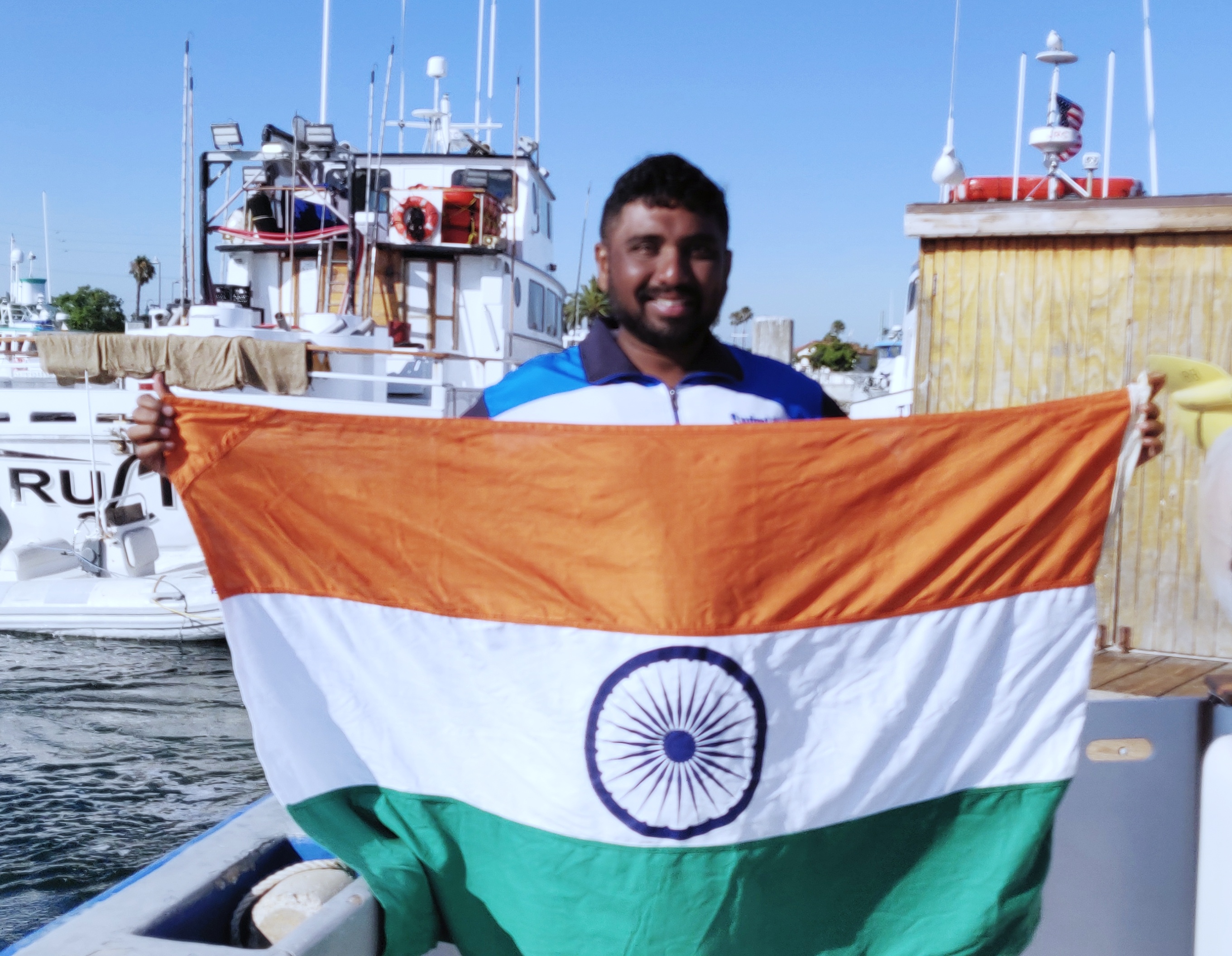 Call of the Ocean

Bharath is a 41-year-old man who leads a vigorous lifestyle.   He swims, works out in the gym, treks and cycles.  He is deeply passionate about swimming in the ocean.  Such passion driven individuals are rare.    However, he has defied the odds and has stood out in his pursuit.   I am proud of this man for achieving his dream—to swim 32 kilometres of Catalina Channel (USA) at this age.  The Catalina channel is one of the California Channel Islands which lies southwest of Los Angeles in the Pacific Ocean.  Bharath swam in the ocean waters as a part of six-member relay team.

Since childhood, he has found great pleasure in swimming.  He would accompany his father who kindled his own interest in swimming.   Bharath whole heartedly embraced swimming not only because he felt at home but also because it provided several physical benefits:   keeps the heart and lungs healthy, builds strength, easy on the joints, etc.  However, the interest in swimming was not confined to swimming in pools.  As the passion grew, he seriously thought of swimming in open waters.  He eventually accomplished that, as his family members supported his endeavour.   One of the ladies who is a regular swimmer in the Catalina Channel said to the Indian team while she saw them preparing to cross the channel – “You have come in such large numbers all the way from India for this accomplishment. You are a crazy lot”.  Rightly so!  It can only be passion that drives such pursuits.

Bharath, after his daily bout of swimming, comes to the gym to hone his fitness skills.  In winter its chilling cold but he dares to swim in the pool without complaints day-in and day-out.  Personally, I can’t imagine getting into a cold swimming pool.  Forget about swimming in the ocean in those extreme conditions, as oceanic swimming can be so unpredictable–the unyielding waves, ice cold water and the marine wildlife can all give you a plethora of reasons not to swim.  Yet, Bharath has dared the devil and has been consistent in his approach.  Longevity is achieved by consistency only.

What Bharath likes is the exhilaration of swimming in the ocean.   Swimming in open waters can also teach a lot about adversity.  Dealing with your own devils (negative thoughts) during those isolated hours can be brutal yet life enhancing.

The preparation to cross the Catalina channel was an arduous adventure for Bharath.  Nonetheless, preparing for the competition was done with absolute fervour.   Regular practice of swimming in open water events: 5km half marathon, 10 km full marathon at Arabian sea (Goa) and back waters of Vanivilas Sagar dam (a picturesque place) near Chitra Durga, etc.  Also, night swims, cold water acclimatisation and five-hour gap swims were regularly practiced as a thorough preparation for the event.

Catalina Island is a channel that extends 32 kms.  However, the tides may drag the distance to a whopping 50 kms, and also the channel comes with a maximum depth of 3000 meters.  The Water temperature ranges from 5 degree to 21 degree Celsius.  Dolphins, sea lions and sea birds are sited often as the Island has a rich marine life.  It is also one of the Oceans’ seven swim marathons.

Bharath and his team had to fly to the USA to participate in this event.  Obtaining his US visa turned out to be a laborious process.  Bharath often complained to me about various hiccups he had to encounter in the processing of the visa.  Finally, after the visa processing, the team reached the Catalina Channel several days prior to the competition, for they wanted to get acclimated to the open waters.  The team practiced twice a day—9 a.m. and 6 p.m.   Swimming during nights was also practiced. Getting used to the ocean’s cold water was the most difficult part.  To add to the team’s woes, one lifeguard pronounced that it was the coldest summer water in many years—13 degrees Celsius.  However, during the practice the delightful presence of dolphins was a treat to the eyes.  It’s seen in the movies that the dolphins are human friendly, and now the team saw with their naked eyes that the dolphins were indeed playful and human friendly mammals. It was the cooking, travelling to nearby places and visiting shopping malls which brought a sense of community among them.  The feeling of togetherness was heartfelt and enriching.

Bharath participated in a relay team called Albatross.  There were three relay teams and each team contained six members.   As improper diet could have been disastrous, tedious planning to provide ample nutrients to the body was done. Swimming burns a lot of calories, and these calories could only be supplied to the body by eating fast foods such as, burgers, sandwiches, nutrition gels and bars which are jam packed with calories.  Also, the equipment for night swim—glow sticks and disc lights were duly arranged.

Sadly, the sea was rough and regrettably several swimmers in the team got sea sick, nauseated and were uncontrollably vomiting before venturing into the waters to compete.    Thus, several swimmers were in bad shape when they started the journey.  Unhappily, a few great swimmers who normally could easily swim four to five kms per hour were covering a distance of only 700 meters per hour.   As the weather worsened the swimming was aborted.  However, the next day the team held their nerve and rallied in the extremely cold water.

Each member in the relay team played a crucial role. The one and only goal for the team was to finish the swim and to feel the warmth of sand on their feet by reaching the shore.  Coincidentally, it was also discovered that since 1981 the Albatross relay team was the first Indian team to cover the Channel.   Bharath was a proud member of the team who played an important role in crossing the Channel.  He flaunted his achievement by displaying the Indian flag with open arms.

I wrote recently about the role of community in one’s success.  Bharath is also thriving in a conducive environment.  He operates with a group of like-minded swimmers who are equally motivated.  In this group you find swimmers aged ranging in age from 40 to 73 years.  Mr Prakash Hegde, 61, one of the most experienced swimmers, was the captain of the relay team in which Bharath participated. (I am also proud to write about Prakash.  By reviewing my book—Training in the Gap-he extended a great helping hand.  His review is proudly displayed on the backside cover of the book).

Being motivated becomes your second nature when you are surrounded by inspired individuals.  The need of the hour is a healthy community that cultivates prosperity and success.  Give and take!  Also, as The Dalai Lama may say, this shows the importance of “interdependence.”  Consider an individual sporting event such as tennis.  The current number one ranked player in the world, Rafael Nadal, depends on his team for his success:  physios, coaches, sports managers, family members, etc.  His success isn’t his alone.

Swimming the Catalina Channel was the beginning of Bharath’s adventure.  He has many more dreams to conquer…

4 thoughts on “Call of the Ocean”

Weight loss has been an enigma to several...

Vikas has been a longtime gym client—for more...

Chaitra, my elder Brother, has been coming to...

I have read many books.  Reading a single book...